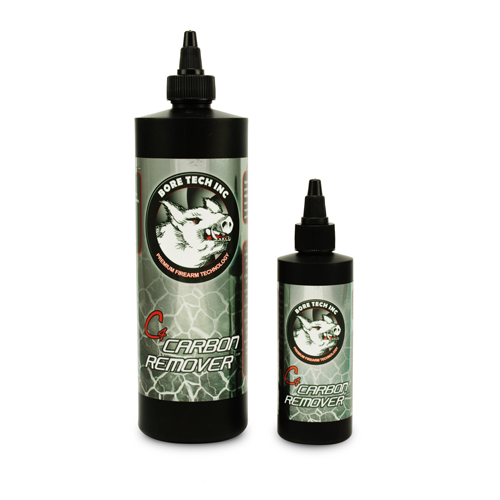 Bore Tech’s ELIMINATOR is the patent pending bore cleaner that has taken the shooting industry by storm. As a result of advanced chemical research, ELIMINATOR surpasses the rigorous demands of the modem day shooter and is environmentally safe.

ELIMINATOR’s proprietary formulation is accomplished through a new combination of chemicals never before introduced to the shooting industry.

ELIMINATOR has the ability to simultaneously cut through the layers of carbon and copper fouling that have accumulated on the barrel‘s wall with each shot ﬁred.

ELIMINATOR begins its assault on fouling by chemically loosening and releasing carbon deposits from the barrel’s surface. ELIMINATOR utilizes a blend of chemical surfactants that break-up and remove carbon deposits with ease. No tedious brushing and patching needed, even on stubborn build-up.

In a two step process, ELIMINATOR ﬁrst breaks down the copper by reconfiguring its electronic state. Then, by a specially developed binding agent, ELIMINATOR acts like a magnet and selectively attracts and captures the copper in a suspended form rendering it unable to redeposit in the ﬁrearms bore. The continued rapid and complete extraction of any remaining carbon and copper progresses and cleans unimpeded, undiluted, full strength without becoming saturated with carbon and copper molecules.

Another beneﬁt of ELIMINATOR is it also contains a rust preventative, which shields and conditions the ﬁrearms bore after cleaning. Just dampen your last patch with ELIMINATOR and your bore is protected from rust and corrosion.

Whether your barrel is steel, stainless steel, or lined, ELIMINATOR is 100% SAFE for an inﬁnite period of time.

Bore Tech‘s ELIMINATOR is without a doubt the premier, state of the art bore cleaner that quickly eliminates carbon and copper fouling without the hazards, toxicity, and odours found in competitive based cleaners. You can trust Bore Tech to put this much attention and detail into a product. No “Snake Oil” here.

Cu+2 COPPER REMOVER’s proprietary formulation and cleaning process is designed for one thing, continued, rapid and complete extraction of any copper fouling in your ﬁrearm‘s bore. The key to the copper removing properties is found in a unique and rapid two-step process. In the ﬁrst step, the breakdown of the copper is achieved by reconﬁguring the copper‘s electronic state. Metallic copper with a neutral charge, Cu0, is oxidized or broken down to its cupric state, Cu+2. Then in the second step, a specially enhanced binding agent within Cu+2 acts like a magnet, and selectively attracts and captures the copper, rendering it unable to redeposit in the firearms bore. In “shooters” terms, instantaneous blue patches and a clean barrel.

Whether your barrel is steel, stainless steel, or lined, Cu+2 COPPER REMOVER is 100% safe for an infinite period of time.

BORE-TECH’s Cu+2 COPPER REMOVER is without a doubt the premier, state of the art copper remover that quickly eliminates copper fouling without the hazards, toxicity, and odours found in competitive based cleaners.

Bore Tech’s C4 CARBON REMOVER is the newest patent pending addition in Bore Tech’s technologically advanced and innovative line of chemicals. The C4 CARBON REMOVER’s advanced chemical formulation is a new combination of chemicals never before introduced to the shooting industry. Following extensive research and development, a carbon removing solution that far surpasses the rigorous demands of the modern day shooter and environmentally minded society has been devised.

Unlike competitive solvents, the C4 CARBON REMOVER’S proprietary non-flammable, non-hazardous and 100% biodegradable formulation does not merely act as a liquid carrier relying on mechanical action to provide cleaning, it relies on a sophisticated blend of surfactants, penetrants, suspending agents and chemical action to remove the stubborn carbon deposits. This special formulation provides a deep cleaning approach that is extremely quick and powerful. It eliminates the time consuming and labour intensive cleaning of the past. Just wet the bore or soak your parts for a few minutes and then patch or wipe dry. It is that effective and easy.

From Carbon Black to Shinny as a Diamond… Bore Tech‘s C4 CARBON REMOVER sets a new standard in gun cleaning.

RIMFIRE BLEND‘s proprietary formulation is accomplished through a combination of chemicals that contains no ammonia, no offensive odours and is 100% biodegradable. It has the ability to simultaneously cut through the layers of lead, wax and carbon fouling that builds on the barrel walls.

RIMFIRE BLEND uses an exclusive approach in order to penetrate and lift the lead off of the barrel‘s surface. This approach allows the chemical to perform all the “grunt” work, allowing for minimal time spent brushing and patching. You will be surprised when you see strands of lead pouring out of the end of your bore.

Whether your barrel is steel, stainless steel, or lined, RIMFIRE BLEND is 100% safe for an infinite period of time.

RIMFIRE BLEND is another addition to Bore Tech‘s premium, state of the art bore cleaning line.

Bore Tech’s CHAMELEON GEL (pronounced like the colour changing lizard) is a cutting edge colour indicating cleaner and polish that effectively removes heavy carbon, copper, lead, and plastic fouling. The exclusive chemical and mechanical cleaning technology is non-harming, non-embedding, biodegradable, and 100% safe for all barrel types. The easy to use gel formulation requires no mixing and cleans up quickly for a shiny barrel every time.
CHAMELEON GEL is recommended for extremely fouled bores, heavy carbon fouling in throat area, every 250-500 rounds to polish bore, and heavy moly fouling in bores.
Unlike any other “bore paste” cleaner, the CHAMELEON GEL is the first to utilize colour indicating, chemical, cleaning technology. This in conjunction with the PROVEN, 100% barrel safe polish, effectively cleans and provides the shooter with what type of fouling is in the bore and when the bore is clean. This combination of both chemical and mechanical action safely cleans bore in half the time of traditional bore paste cleaners.
The standard mechanical abrasion technology used for decades in traditional bore pastes turns black whether the barrel is copper fouled, carbon fouled or 100% clean. Shooters have no indication of their bore condition and in turn over use the traditional bore pastes which will damage barrel steels.
If you want to quickly, effectively and safely clean your barrels, Bore Tech’s CHAMELEON GEL is the cutting edge cleaner / polish you have been looking for.

USE INTRUCTIONS
UNLOAD FIREARM
1) First, wet bore with one or two patches of C4 Carbon Remover, Cu+2 Copper Remover or ELIMINATOR Bore cleaner.
2) 2) Use the correct calibre jag and undersized patches or an undersized nylon brush with a patch wrapped around.
3) Next, evenly coat a patch with CHAMELEON GEL.
4) Make one full length pass per treated patch while short stroking the bore back and forth in two inch increments.
5) Observe colour (S) of CG to indicate fouling type in barrel.
a. Blue/Green = Copper fouling.
b. Black = Carbon fouling.
c. Grey = lead / moly.
d. White = Clean bore.
6) Let CG remain in barrel for 3 – 5 minutes.
7) Push two or three wet patches of C4, Cu+2 or ELIMINATOR through the bore to remove CG and observe patch colour.
8) Repeats steps 1 through 7 as necessary.
9) When GC remains white in colour, bore is clean.
10) Before storing firearm, apply rust and corrosion inhibitor.

How to use instructions below

MARCH Scopes are the most accurate, the most powerful hand built precision engineered rifle scopes in the world...

Get the news and
latest product information
to your inbox. Join our
newsletter service today.

Contains all MARCH scope images & logos for media/press use only. (86mg)

2022 | All copyright for this website is owned by MARCH Scopes. All rights reserved.

Thank you for contacting us. We will contact you soon.